TORONTO, March 14, 2021 /CNW/ – Battle North Gold Corporation (TSX: BNAU) (OTCQX: BNAUF) (“Battle North“) and Evolution Mining Limited (ASX: EVN) (“Evolution“) are pleased to announce they have entered into a definitive arrangement agreement pursuant to which Evolution has agreed to acquire all of the issued and outstanding shares of Battle North (the “Transaction“) at a price of C$2.65 per common share in cash (the “Consideration“), for total consideration for all issued and outstanding shares pursuant to the Transaction of approximately C$343 million.

“The all-cash offer is at a significant premium to market and reflects the extraordinary efforts of the Battle North team to create value at the Bateman Gold Project and ultimately deliver an outstanding outcome for Battle North’s shareholders. We believe that there are unique and undeniable merits to combining the Red Lake assets of Battle North and Evolution and this Transaction reduces development and execution risk. Evolution is a highly regarded mining company with a demonstrated ability to successfully operate internationally. The Battle North team looks forward to working with Evolution to close the Transaction and smoothly transition operations to the new team.”

“Both Evolution and Battle North started the negotiation with a clear alignment that a consolidation of the properties would create value that would not be available if they were developed and operated separately. George and his team have done a very good job at progressing the Bateman Gold Project to this point and recognise that this is an ideal window to consolidate the properties ahead of the construction of the Bateman mine which is now in its early stages.

This acquisition provides Evolution with an opportunity to expand our footprint in the region and create value by leveraging the infrastructure of the two operations. The additional processing capacity from the new Bateman mill will also accelerate our ability to achieve our objective of producing in excess of 300,000 ounces of gold per annum from Red Lake. In the 12 months that we have been operating at Red Lake we have demonstrated that we are a committed steward of the region. This expansion of our footprint will provide us with an opportunity to build on our track record as a safe and sustainable operator for the long term benefit of a broad range of stakeholders including the local workforce, regional communities and our Wabauskang and  Lac Seul First Nation Partners.”

The Transaction will be implemented by way of a statutory plan of arrangement under the Business Corporations Act (British Columbia). The Transaction will be subject to the approval of 66⅔ per cent of the votes cast by Battle North shareholders at the annual and special meeting of shareholders (the “Shareholder Meeting“) and a simple majority of the votes cast by Battle North shareholders, excluding certain persons required to be excluded in accordance with Multilateral Instrument 61-101 of the Canadian Securities Administrators. The Shareholder Meeting is currently expected to be held in May 2021.

Details of the Transaction and the Arrangement Agreement will be set out in the management information circular that will be prepared and mailed to Battle North shareholders in connection with the Shareholder Meeting. As well, additional information regarding the terms of the definitive arrangement agreement, the background to the Transaction, the rationale for the recommendations made by the independent directors of the Board and the Battle North Board and how shareholders can participate in and vote at the Shareholder Meeting will be provided in the management information circular. Shareholders are urged to read these and other relevant materials when they become available.

All directors and officers of Battle North (representing approximately 0.60% of the currently outstanding Battle North common shares) have entered into voting support agreements with Evolution to vote their shares in favour of the Transaction.

The Transaction has the full endorsement of Evolution’s Board of Directors and will be funded from Evolution’s current cash balance and available credit facilities. No vote will be required by Evolution shareholders.

Subject to the conditions precedent being met, the Transaction is expected to close in the second calendar quarter of 2021.

During the interim period, non-critical path construction items at the Bateman Gold Project may be suspended or deferred. 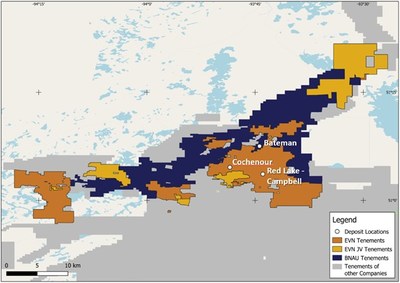 Board of Directors Recommendation

Canaccord Genuity Corp. and Cormark Securities Inc. have each provided a fairness opinion to the Board of Directors of Battle North that, as of the date of the opinions and based upon and subject to the assumptions, limitations and qualifications set out in such opinions, the Consideration to be received by Battle North shareholders under the arrangement is fair, from a financial point of view, to Battle North shareholders.

Battle North is developing the Bateman Gold Project to become the next gold producer in the renowned Red Lake Gold District in Ontario, Canada and controls the second largest exploration ground in the district. Battle North also owns a large gold exploration land package on the Long Canyon gold trend near the Nevada–Utah border in the United States. Battle North’s shares are listed on the Toronto Stock Exchange (BNAU) and the OTCQX markets (BNAUF). For more information, please visit our website at www.battlenorthgold.com.

Evolution Mining is a leading, growth-focused Australian gold miner. Evolution operates five wholly-owned mines – Cowal in New South Wales, Mt Carlton and Mt Rawdon in Queensland, Mungari in Western Australia, and Red Lake in Ontario, Canada. In addition, Evolution holds an economic interest in the Ernest Henry copper gold mine in Queensland. FY21 Group gold production is forecast to be between 670,000 – 730,000 ounces at an All-in Sustaining Cost of A$1,240 – A$1,300 per ounce.

Cautionary Statements regarding Forward-Looking Statements and Other Matters

All statements, other than statements of historical fact, contained or incorporated by reference in this news release constitute “forward-looking statements” and “forward looking information” (collectively, “forward-looking statements”) within the meaning of applicable Canadian and United States securities legislation. Generally, these forward-looking statements can be identified by the use of forward-looking terminology such as “anticipated”, “assumption”, “committing”, “demonstrate”, “developing”, “estimate”, “expected”, “exploration”, “factors”, “favourable”, “feasibility”, “focus”, “forecast”, “forward”, “future”, “may”, “could”, “believes”, “need”, “plan”, “potential”, “project”, “promising”, “subject to”, “trend”, “upon”, “upside”, and “will”, or variations of such words, and similar such words, expressions or statements that certain actions, events or results can, may, could, should, will (or not) be achieved, occur, provide or result in the future. In some cases, forward-looking information may be stated in the present tense, such as in respect of current matters that may be continuing, or that may have a future impact or effect. Forward-looking statements include statements regarding the purchase by Evolution of all the issued and outstanding common shares of Battle North; the anticipated timing of the Shareholder Meeting; the anticipated timing of the closing of the Transaction, and the satisfaction of closing conditions including but not limited to, required shareholder and court approvals in connection with the Transaction; the merits of the transaction to Battle North shareholders; the anticipated production increase in Red Lake by Evolution; development activities during the interim period; the expansion of Evolution’s footprint; and long-term benefits to stakeholders including the local workforce, regional communities and Evolution’s Wabauskang and Lac Seul First Nation Partners.

Forward-looking statements are inherently subject to known and unknown risks, uncertainties, contingencies, assumptions and other factors which may cause the actual results, performance or achievements of Battle North to be materially different from any future results, performance or achievements expressed or implied by the forward-looking statements. Such risks, uncertainties, contingencies, assumptions and other factors include:  the risk that the Transaction will not be approved by the shareholders of Battle North; the failure to, in a timely manner, or at all, obtain the required court approval for the Transaction; the failure of the parties to otherwise satisfy the conditions to complete the Transaction; the possibility that Battle North could terminate the Arrangement Agreement as a result of a superior proposal that is not matched by the other party; the effect of the announcement of the Transaction on Battle North’s strategic relationships, operating results and business generally; significant transaction costs or unknown liabilities; the risk of litigation that could prevent or hinder the completion of the Transaction; other customary risks associated with transactions of this nature; and the “Risk Factors” in Battle North’s annual information form dated March 27, 2020 (“2020 AIF“) and Battle North’s management’s discussion and analysis for the year ended December 31, 2020 (the “2020 MD&A“). In addition, if the Transaction is not completed, and Battle North continues as an independent entity, there are risks that the announcement of the Transaction and the dedication of substantial resources by Battle North to the completion of the Transaction could have an adverse impact on Battle North’s business and strategic relationships, operating results and business generally.  The foregoing list of risks, uncertainties, contingencies, assumptions and other factors is not exhaustive; readers should consult the more complete discussion of Battle North’s business, financial condition and prospects that is provided in the 2020 AIF. As a consequence, actual results in the future may differ materially from any forward-looking statement, whether expressed or implied.

This news release uses the terms “Mineral Resource” and “Mineral Reserve” as defined in the CIM Standards (collectively, the “CIM Definitions“) in accordance with NI 43-101. While these terms are recognized and required by the Canadian Securities Administrators in accordance with Canadian securities laws, they are not recognized by the United States Securities and Exchange Commission (the “SEC“) and differ materially from the definitions in SEC Industry Guide 7 under the United States Securities Act of 1933, as amended. The SEC has adopted amendments to its disclosure rules to modernize the mineral property disclosure requirements for issuers whose securities are registered with the SEC under the United States Securities Exchange Act of 1934 (the “SEC Modernization Rules“) which, on January 1, 2021, replaced the historical property disclosure requirements for mining registrants that were included in SEC Industry Guide 7. The SEC Modernization Rules include the adoption of terms describing “mineral reserves” and “mineral resources” that differ from the corresponding CIM Definitions. Accordingly, there is no assurance that any “Mineral Resource” or “Mineral Reserve” estimate that Battle North may report under NI 43-101 would be the same had Battle North prepared such estimates under the standards adopted under the SEC Modernization Rules. For the above reasons, the “Mineral Resource” and “Mineral Reserve” estimates and related information in this news release may not be comparable to similar information made public by companies subject to the reporting and disclosure requirements under the United States federal securities laws and the rules and regulations thereunder. Battle North is not required to provide disclosure on its mineral properties under SEC Industry Guide 7 or the SEC Modernization Rules and will continue to provide disclosure under NI 43-101.

The scientific and technical information contained in this news release has been approved by Mike Willett, P.Eng., Battle North’s Vice President, Operations and Projects, who is a Qualified Person as defined by NI 43-101.