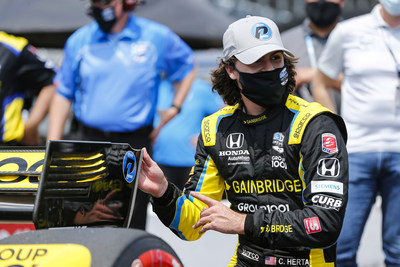 Herta and Harvey were two of the seven Honda drivers to advance through the first round of INDYCAR “knockout” qualifying.  Behind the lead pair, defending series champion Scott Dixon will start eighth in his Chip Ganassi Racing Honda, with Rahal Letterman Lanigan’s Graham Rahal and Honda Indy Grand Prix of Alabama race winner Alex Palou rounding out the top 10 for Honda. Andretti Autosport’s Alexander Rossi and James Hinchcliffe also advanced to second-round qualifying, and will start 11th and 12th, respectively.

Colton Herta (Andretti Autosport Honda) Pole Qualifier, 1st NTT INDYCAR SERIES pole of 2021 and 5th career pole: “I knew [before the start of the race weekend] we had a good race car for here. Just had to get through those two [qualifying] stages nice and clean. Really happy for [my] guys. We’ve got the best seat in the house [pole] for the start, it’s been an incredible weekend so far. Can’t wait to get going again tomorrow.”

Jack Harvey (Meyer Shank Racing Honda) Qualified Second, third career front-row start: “We felt confident coming into this weekend, as we’re run well here previously. We were strong all day, and happy to share the front row with our ‘pseudo teammate’ [Colton Herta]. With Colton, with Honda and the Andretti Autosport connection [MSR shares a technical partnership with Andretti Autosport], it’s a really good day for us all.”

Where to Watch the Firestone Grand Prix of St. Petersburg