DAYTONA BEACH, Fla., Feb. 2, 2022 /CNW/ – Robert Wickens made his emotional return to professional racing last Friday in the four-hour BMW M Endurance Challenge at Daytona International Speedway, scoring a podium third-place finish. It was a storybook start to the newest phase of the Canadian’s motorsport career, as he and teammate Mark Wilkins brought their #33 Elantra N TCR to the finish in third position. The triumph marks Wickens’ first podium appearance since a second-place finish in the NTT INDYCAR SERIES race at Mid-Ohio SportsCar Course in 2018. 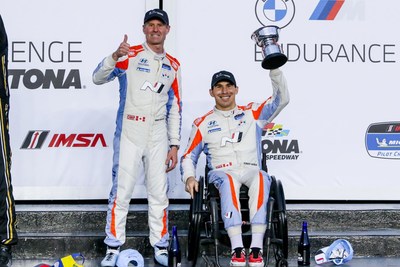 “Everything I’ve heard from Bryan Herta and the engineers is that it’s a long race, a race of attrition,” said Wickens. “There were a lot of opportunities where I could have tried a high-risk move, a high-risk pass to try and gain that little bit, but endurance racing is a war. You have to make it to the end.”

For Wickens, who recently announced that he and his wife, Karli, are expecting their first child together, this was clearly more than just another race.

“Karli has always been by my side,” said Wickens. “Before the accident, during the darkest days of my recovery, she’s been here. Now that she’s pregnant and we’re expecting our first child, we were debating whether it was safe for her to come. We decided it was a moment she had to be here for. I’m so happy that she was right by my side. It was a really nice experience.”

When Wickens’ stint was over, longtime trainer Jim Leo was there to assist with his driver change. Leo has worked with Wickens since 2007, when Wickens raced in Formula Atlantic. Leo has been with the 2018 INDYCAR Rookie of the Year throughout various stages of his spinal cord injury recovery, and Wickens called Leo’s role in Friday’s podium effort “poetic.”

Wickens’ teammate Mark Wilkins, winner of the IMSA Michelin Pilot Challenge (IMPC) championship with Hyundai and Bryan Herta Autosport (BHA) in 2019, weighed-in on what the achievement meant to him.

“I wanted to get the podium really badly,” said Wilkins. “A round one podium has eluded us in the past, and it feels so good to change that. Robert did a great job in his first race back. He drove the wheels off of the car and; honestly, it really inspired me. I went out there with conviction. Congratulations to Michael Lewis and Taylor Hagler. It’s a two-three, not a one-two, but a strong championship points gathering weekend.” Hagler, Lewis Start 2022 Campaign on the Right Foot
Taylor Hagler and Michael Lewis fought through early adversity to lead the N Brand fleet to the checkered flag with a second-place finish in the four-hour endurance challenge at Daytona International Speedway. The defending IMSA Michelin Pilot Challenge champions, displaying the #1 number plate on their Elantra N TCR for the first time in series history, gained more than a dozen positions during the course of the four-hour race.

Hyundai secured three of the top-five finishing positions. Wickens and Wilkins completed the podium with van der Steur Racing’s #19 Veloster N TCR finishing fifth. Hyundai and BHA began their championship defense by scoring 320 championship points in the drivers’, teams’ and manufacturers’ categories, as they prepare for Round Two at Sebring in March. Hyundai Motor America
Hyundai Motor America focuses on ‘Progress for Humanity’ and smart mobility solutions. Hyundai offers U.S. consumers a technology-rich lineup of cars, SUVs and electrified vehicles. Our 820 dealers sold more than 738,000 vehicles in the U.S. in 2021, and nearly half were built at Hyundai Motor Manufacturing Alabama. For more information, visit www.HyundaiNews.com.