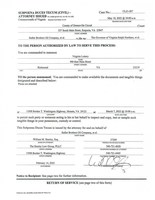 The United State District Court for the Middle District of Pennsylvania entered a permanent injunction against Eckert for its conflict of interest in representing Pace-O-Matic, the largest distributor of skills games in Virginia, while simultaneously working against skills games on behalf of casino clients in multiple jurisdictions.

The injunction resulted from a lawsuit Pace-O-Matic brought against Eckert in February of 2020. In its Order, the District Court found that Mark Stewart, chair of the Eckert’s Gaming Group, had “actively and clandestinely engaged” in an “obviously intentional subterfuge” in representing casinos against the interests of its other client, Pace-O-Matic.

Despite pending federal litigation related to Eckert’s obvious conflict of interest, the Virginia Lottery entered into a consulting agreement with Eckert and, specifically, Pennsylvania attorney Mark Stewart in October 2020 to provide independent “consulting on gaming and compliance issues as requested by the lottery.” Concurrently, Virginia was contemplating new gaming legislation and procedures for the emerging gaming industry in the state.

“The injunction by the federal court in Pennsylvania indicates continued serious ethical violations on the part of the attorneys representing the large out-of-state gambling companies working against Virginia small businesses like my client, Hermie Sadler,” commented Bill Stanley of The Stanley Law Group. “This subpoena requesting certain documents from the Virginia Lottery is a critical piece of our legal argument before the Greensville County Circuit Court that Virginia did not have a valid and compelling state interest to ban skills games.

Not only was Virginia Lottery’s ‘independent’ consultant representing casino interests, but also was embroiled in a clear conflict of interest. It is appalling that this may have been done in an attempt to violate the rights of the small and family-owned businesses, the operators of small convenience stores throughout Virginia who have both operated skill games in their establishments and supported the Virginia Lottery for years. They deserve an answer about the extent of the Lottery’s involvement.

“The Lottery knew – or, at minimum, should have known – Mr. Stewart represented out-of-state casinos committed to dominating the state’s gaming industry by making skills games illegal in Virginia. Nevertheless, the Lottery entered into a contract with Mr. Stewart and Eckert to provide advice on who should be allowed to participate in the emerging gaming marketplace in Virginia. Mr. Stewart and his colleagues at Eckert had proprietary and privileged knowledge about the skills game industry when they met with state and local regulators, elected officials and prosecutors regarding the legality of skills games in Virginia. They worked directly against the interests of skill games, their manufacturers, and Virginia small businesses. Hermie Sadler and his fellow small business owners have an absolute right to know the truth about the Lottery’s complicity.”

Hermie Sadler’s lawsuit against the Commonwealth of Virginia is currently pending, and a final hearing on permanently overturning Senate Bill 971 (2021), “the skill games ban” is set for trial on May 18, 2022, in the Circuit Court for Greensville County.

A copy of the subpoena duces tecum, along with the attached requests and the factual and legal basis for the documents requested are attached to this press release.